Right after our mind-drenching study circle in the global history laboratory here in Turku at the end of October 2018, I headed for another intellectually stimulating multi-disciplinary workshop hosted by the Bayreuth Academy of Advanced African Studies in Germany. While discussions at the study circle proceeded, my mind constantly circled around the global historian’s inescapable task of theorizing the ‘global’ in global history. The theorization would rightfully represent a valid starting point for thinking about broader spheres, scales, and themes in investigating global history.

However, the broader analytical theme of the workshop at Bayreuth centered on “Re-assembling genealogies of Political Struggle and Contestation”.  It was intellectually challenging as I learned about unfamiliar terms and phrases under investigation such as fast vs slow activism, heteropatriarchal capitalism, leaderless leadership,  queer politics, queerness, and queer activism among many others.  The main title of the workshop was ‘Multiple Pasts, which Futures?’, a phrase I found rather problematic because two days earlier at the study circle in the laboratory in Turku, we had read Philip Ethington’s explosive article on ‘Placing the Past: Groundwork for a Spatial Theory of History’. From his article, I captured a conceptualization of the past as a sort of cartographic representation of places along categorical coordinates within the phenomenon of ‘spacetime’.

Now here I was, waiting and wondering at the Helsinki international airport on my way to Nuremberg, thinking about reasons why I had problems with the phrase, “Multiple Pasts”. In my every attempt to read historical texts, I have rather always perceived the presence of ‘one past’ with multiple futures. This was a variant of the idea of a cartograph, however, it represented a metaphysical cartographic representation of temporality pointing towards an ontological categorization of the past.  But even further, I always perceived a more latent phenomenon within this quagmire in temporality which I struggled to put into words clearly. I have finally settled for the term ‘hyper-present’ when I try to make sense of it all and when I think about the problems of conceptualizing and writing about the past. A ‘hyper-present’ I define as a non-existent ontological abstraction incubating multiple past-futures seeking dominance for the present. I perceive that global historians might at some point need to develop the skills required to capture the phenomenon of the hyper-present in ‘writing’, as it would go a long way in providing critical answers to questions on the epistemo-ontological divides which the discourse of global history currently attempts to ratify. The concept of the hyper-present further gives global history an alternative ontological character as global historians seek out new directions to theorize the phenomenon of the ‘global’ in global history.  These are thoughts I plan to further develop in future work.

But now, back to Bayreuth. I was overwhelmed by the enthusiasm which the African studies center exhumed in such a small German city. Despite living in Nigeria for several years before moving to Northern Europe for advanced studies, the spatial composition of Bayreuth and its mini-environs left a different part of my intellectual and artistic consciousness awakened to a degree I had never felt in any of the cities I had visited in Europe thus far.  At Iwalewa Haus, where the workshop was conducted, the past-futures which define the composition of my personal history, or better put, my biography up until this point, all flashed into my consciousness at a moment, a single instant. Back in Nigeria, I had studied for a bachelors degree in Industrial Design before proceeding to Turku, Finland for a masters degree in Futures Studies in a school of economics. I always described my life’s career journey as a case of “absolute serendipity” because I could hardly find any connection whatsoever in how those fields of study commingle. Now in my ‘present-present’, I work as a doctoral candidate in General history. My life’s passion has always been to figure out a way to pull together these aspects of my academic evolution into a synergy within which the imprisoned multifaceted encrustation which I embodied over the years could be unshackled. However, at Iwalewa Haus,  this instance of absolute serendipity was deconstructed in a moment.

It beats my imagination that a ‘space’ could get me close to the metaphysical freedom I sought careerwise, the space here precisely being ‘Iwalewa Haus’ right there in Bayreuth. The phrase “Iwalewa” is a term often used in the Yoruba language of western Nigeria when men attain a stage to pick a marital mate. Despite its direct translation being  “Character is Beauty”, its deeper transliteration gives the notion that ‘real beauty is not found in the outward appearance of the bride but in her character.  In this space, my history or better still, past-futures converged. While my other colleagues were in a strict attendance for a workshop, I was undergoing an intellectual, artistically undergirded spatial experience.  Right at the upper floor of this building was an art exhibition which featured paintings from Universities in Nigeria such as Nnamdi Azikiwe University, University of Ibadan and a host of popular universities across Africa as well. These art pieces told stories in ways history would not have been able to tell me about my own country’s postcolonial discourses in political contestation and the hegemonies of knowledge and power. In the paintings were embedded myths and metaphors which conveyed degrees of emotive intelligence for understanding the transcendence of time and space in the regions of Africa they depicted. 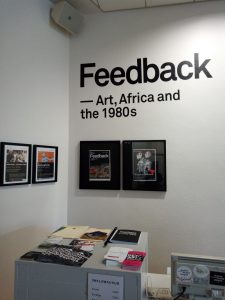 There I was, confronting these layers of intelligence telling about “other spaces in other spaces”, a grandiose metaphysical exemplar of ‘localizing the global’. But even further, I couldn’t help but conceive this flash in a moment as an ultimate depiction of the phenomenon I earlier described, the presence of ‘the hyper-present’. I was experiencing flashes of my past-futures in the present. At the workshop, I tried to theoretically show how some forms of political resistance and protests which society experiences are due to animosities and frictions between or among these commingling ‘supposedly’ assumed ‘dead pasts’ evolving in a living ‘present’.

Herein I see the emergence of a larger role for the global historian of the 21st century, that is,  ascertaining and divulging deeper understanding of the structures and genealogies of the hyper-present. I conclude by asserting that investigation into the ways with which political contestations and resistance in the present have been shaped and formed through historical trajectories and genealogies in space-time might be pertinent in the journey towards developing a theory of the ‘global’ in global history.